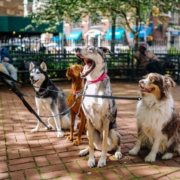 What is pack theory?

Back in the 1930-40s some Swiss scientists, one of them being Rudolph Schenkel, studied captive wolves in a zoo. They observed that one male and female would assume the role of leader. The leaders would control the other wolves by the use of dominant behaviors. There seemed to be constant competition among the wolves to gain control. The scientists believed this led to the aggressive behavior they were observing.

Later studies in the 1960-70s, supported this initial finding. David Mech, a renowned wolf expert was one such corroborator of the initial study, but Mech would later change his opinion. He came to believe that since the wolves studied were living in an artificial situation that their behaviors didn’t mirror those found in nature. He believed that unrelated wolves living together in close quarters would cause more tension than in their natural habitat.

Pack theory has been defined as a system of relationships in an animal group that is based on hierarchical ranking usually achieved by aggressive encounters so that one or two members are at the top and the others are submissive.

In 2000, Mech revised his previous beliefs and said that a pack is more like a family with family dynamics. There is a mom and dad in charge and the children follow and learn from them.

So what should we conclude from all of this?

Related animals may have less tense relationships when living together than animals living in contrived situations, but then isn’t that what most dog owners are facing?

Whichever way you slice it, there is a hierarchical structure to a pack of dogs. Just look in your own backyard or at your local dog park and observe how dogs interact with each other. You will see a variety of dominant and submissive behaviors playing out.

What does any of this mean for the average dog owner?

Understanding pack structure is useful. It can help us understand our dog’s behavior. It helps us to ensure more successful interactions with other dogs and informs our training. The difference just may be that pack theory used to lead people to believe that a more aggressive training approach was necessary whereas now many trainers, ourselves at The Asheville Dog Company included, see that a more balanced approach is needed. See our first blog post here to read further about balanced training.https://ashevilledogcompany.com/balanced-dog-training/

In a pack, the alphas are in charge, but they also interact with the pack in playful and loving ways. Only if it is needed will they assert their dominance. Once everyone sort of understands their place, then things run smoothly. This is as it should be with the human as the leader as well. When you first bring a dog home, order is established through teaching and training. Then, ideally, things fall into a rhythm. Whenever a pack dynamic changes, then the order can get upset and needs to be reestablished.

Let me note, that when it comes to our households, the group will include all the dogs and people that are living together. If you pay attention, you will see that dogs relate to the people in their families differently. A dog may bond more closely with one member of a couple or see a young child as an equal or lower down family member.

So the next time your at the dog park or sitting on your back porch watching your dogs play, take a moment to notice how they interact and how the dynamics change depending on the situation and maybe you will have a little more insight into your dog. The more you understand your dog, the better your relationship will be.